Behind the scenes at WDYTYA? 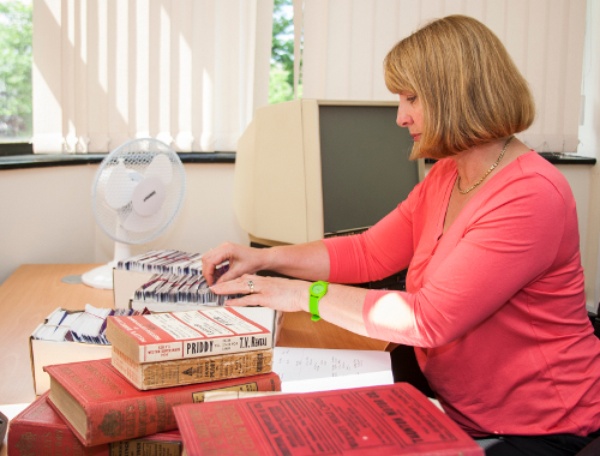 Anglia Research’s Eileen Butcher – who appears in the latest episode of Who Do You Think You Are? – offers us a glimpse behind the scenes of the BBC’s showcase genealogy programme.

Like many another genealogist, Eileen Butcher used to watch Who Do You Think You Are? and wonder who had done the research and how they had done it.

“In December 2010, I was approached by Wall to Wall, the production company who make the programme for the BBC,” she says.

“They asked if I could help them with some research on a local family. They don’t tell you who it is that they are doing the programme on, although I did work out it was Sebastian Coe from the little information they gave me.”

Since then Eileen has appeared in the Minnie Driver episode in 2013, as well as in the most recent episode featuring actress Sheridan Smith. She has also done research for several other episodes, both for the UK and the US versions of the show.

“You tend to be asked to research a small section of the story, and you may not have much idea of what comes before or after until the programme is aired,” she explains.

“For example, with the Reba McEntire episode on the US version of the series, my research was focussed on Chester Record Office, as one of Reba’s ancestors from Macclesfield was sent to America as an indentured servant. With Lesley Sharp, I was looking at the records of the maternity hospital where she was born.

“The research you’re asked to do is very varied. You really have to pick up anything they throw at you – and there’s always a time constraint. Generally they need the information by tomorrow. But the work is never run of the mill. As a researcher you need to have an eye for the details that will bring the story to life.”

Each episode of WDYTYA? tends to be strongly themed. For example, the episode on Julie Walters spotlights the plight of tenant farmers in 19th century Ireland, while Sheridan Smith’s story revolves around the popularity of the banjo in the Victorian period, and the precarious lives of performers and impresarios.

“I think this is what makes the programme so interesting,” Eileen comments. “It’s an opportunity to look in depth at certain people and places, or moments in history.

“The people featured are usually the ones with the more unusual stories as these obviously make better television. Some possible celebrities are rejected as their ancestors are ordinary, with no black sheep or juicy tales. Other people are contacted but have no interest in their family history.

“None of the celebrities who go on to make the programme are given any information in advance. They are drip-fed details as the story unfolds. So when I come to do the filming, there are certain things I have to tell the celebrity, but I can’t tell them anything else – even if they ask!

You can watch the latest episode of WDYTYA? on BBC iPlayer, here.