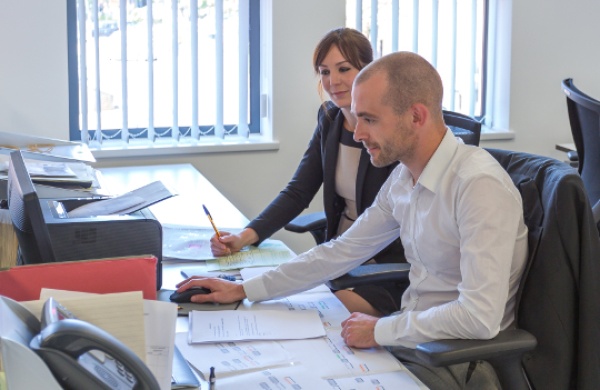 In this interview, Oliver Howard looks back on a decade with Anglia Research and a whirlwind of technological change.

Oliver Howard joined Anglia Research in 2004, the year that Facebook was launched and Google went public. Back then, we’d all heard about the so-called “information superhighway”, but most of us didn’t even have broadband. From today’s perspective, it seems like we were living in a different age.

“I think it would be fair to say my time with Anglia Research has definitely straddled the transition from analogue to digital,” says Oliver. “We now have a fair bit of success by contacting beneficiaries on Facebook, for example. I didn’t know it existed when I started!”

“When I joined the company, searching the births, marriages and deaths (BMD) indexes involved hefting around huge books at the Family Records Centre in London. Although this was good exercise (the books weighed several kilos), it meant that index searches took much longer than they do now. The alternative was searching the indexes on microfiche – easier on the arms but harder on the eyes.”

Ten years ago Oliver was regularly pounding the London streets. He can still reel off their names: “High Holborn, Gray’s Inn Road, Rosebery Avenue, Exmouth Market – between the Family Records Centre, the Principal Probate Registry and the London Metropolitan Archive, bag stuffed full of handwritten research notes and certificate order forms, hurried phone calls with results conveyed to head office as you’re about to get run over by a bus. Ah, good times!”

As things have moved on to the Internet his work has become more office-based.

“BMDs are online, electoral rolls are online, probate material is now online,” he explains. “So, yes, the hands-on aspect of the work has diminished. It certainly hasn’t gone entirely, but there’s a lot less call for it now.”

Oliver would be the first to admit that some of the new online indexes are far from perfect. “There are numerous examples of mistranscription and stuff that is just plain missing,” he observes. Nevertheless, from the point of view of speed, he thinks that “things are infinitely better”.

“A decade ago, birth, death and marriage certificates had to be ordered at the Family Records Centre. We’d fill out individual orders and then collect them days later. Now we can order any certificate online and have it in less than 24 hours.”

However, some so-called technological advancements have proved to be nothing of the sort. “When I started we could obtain probate material (wills and grants) within an hour for £5. Then the service became 24 hours for £10, and now that the probate service has put their index online, it can take up to ten days to get probate material.”

As far as non-technological changes are concerned, Oliver pinpoints 2007, and the start of the Heir Hunters television series, as a transitional moment that inevitably led to a culture change.

“Nowadays, there are a lot of very small or one-man-band outfits in the industry, people who have seen the TV show and thought ‘I could have a bash at that,’” he says.

“On the whole I think they are well-intentioned (apart from a few notable cases where they have been outright fraudulent), but the list of errors they have made in the distribution of estates is astounding and the result is scare stories that bring a whole industry into disrepute.”

It doesn’t take a Sherlock Holmes to trace a causative link from the Heir Hunters programme, through the proliferation of amateurs and opportunists, to one of the biggest changes to impact the world of probate research in recent years: the way the Treasury Solicitor’s Department now advertise bona vacantia cases throughout the week, with no indication of their value.

“Up until January 2013 the list of new cases was released just after midnight on a Wednesday/Thursday,” explains Oliver. “Our night shift would kick off the research and we’d pick it up when we got into the office at 5.30 or 6.00 on Thursday morning.

I don’t miss the trudge through the snow in the pitch dark at five on a December morning, but I do miss the excitement
of Thursday.

“Until about six years ago, we used to have approximate values for the estates as well, so Thursdays were frantic. The competition with other firms was extremely intense on high value estates and you’d sometimes not leave the office till late on Thursday evening.

“Now that the list is more or less daily you might get cases at any time, of unknown value. I don’t miss the trudge through the snow in the pitch dark at five on a December morning, but I do miss the excitement of Thursday.”

With so many factors impacting the way he works, how has Oliver managed to keep abreast of the changes?

“Working for a large organisation, we’re constantly kept informed about new records that become available,” he says. He thinks that being surrounded by colleagues helps as well, not only because knowledge and ideas are regularly exchanged, but also because workmates can provide a fresh pair of eyes when a case seems intractable.

“In the office we will often ask each other to check our research to make sure we haven’t missed anything obvious. Sometimes it’s quite easy to go off on a tangent, and colleagues can be useful to bounce ideas off or just to tell you that your latest theory is nuts.”

Above all, probate research is about finding the facts – but, as Oliver points out, on complicated cases you often need a theory to link the few facts that you have and to work out where you might find more.

“Those cases where you do have to formulate a theory, refine it and then either disregard, replace or have it proven are very satisfying from a mental point of view,” he comments.

“I think that in the ten years I’ve been with Anglia Research I’ve learnt to focus any theorising more clearly and quickly disregard things that are a bit absurd or ‘out there’. The experience I’ve gained also means my hunches are much more often correct. When you’re faced with something a bit tricky, you always have to be ready to strip everything back down to the facts. What do we actually know and what are we assuming? Can my latest theory be easily disproved?

“We like to call our approach to research ‘forensic’, which is right in the sense that a lot can be learnt from the scientific method. That being said, occasionally a wild leap of faith or a hunch leads to a breakthrough – sometimes it is definitely more art than science!”