Will we remember them? 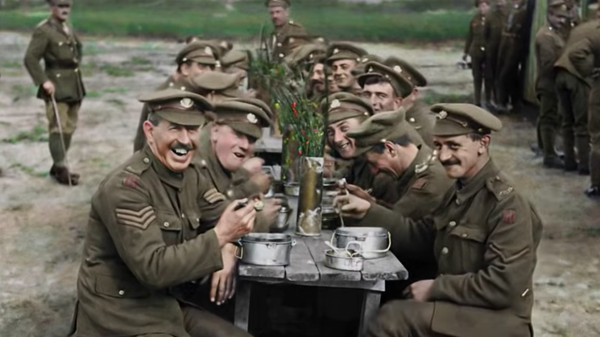 When Peter Jackson’s They Shall Not Grow Old screens on BBC 1 on Armistice Day, it will mark the end of the centenary of World War One. Let’s hope that the film’s extraordinary emotional impact will galvanise more people to add their relatives’ records and stories to Lives of the First World War, the permanent digital memorial set up by the Imperial War Museum.

From the Lights Out vigil of 2014, specific commemorations of Passchendaele, Amiens, Gallipoli and more, to the upcoming 10,000-strong procession past the Cenotaph on Remembrance Sunday, and a symbolic farewell on the beaches of Britain, the UK has certainly tried to live up to the promise of Laurence Binyon’s 1914 poem, “For the Fallen”:

“At the going down of the sun and in the morning,
We will remember them.”

But perhaps nothing in the past four years so completely fulfils the promise to remember as Jackson’s film. Its title, They Shall Not Grow Old, plays on a line from the same poem.

Press gangs aside, 1916 was the first time Britain saw conscription. The Military Service Act specified that single men between 18 and 40 years of age could be called up for military service unless they were widowed or ministers of religion. Is it a coincidence that the Imperial War Museum was founded a year later, in 1917, to record the ‘toil and sacrifice’ of all who served? Special measures call for special promises.

They Shall Not Grow Old starts predictably enough. Then, after 15 minutes of jerky footage of men signing up, training and embarking for France, you arrive at the trenches. Black and white melts into colour. Movements become smooth and you’re jolted awake by real people, fooling around, joking, singing, suffering and enduring on the Western Front.

There are no actors here. This is restored and colourised original footage from the archives of the Imperial War Museum. The voices on the soundtrack belong to veterans, taped in the 1960s for The Great War documentary series and preserved in the BBC’s audio archive.

It’s not the technical virtuoso of the film that astounds – although it is astounding (you can learn more about how it was made here). What takes your breath away is the sheer immediacy and humanity of something that your mind classifies as ‘history’, something that you have never seen – or imagined you’d see – looking so alive.

At one point a soldier shouts “hello mum” as he passes the camera. At another point, a veteran’s describes how he had to kill a fallen comrade. This mashing together of humour, stoicism and tragedy makes They Shall Not Grow Old as authentic and human a memorial to four years of horror as it is possible to cram into 90 minutes of screen time.

The last veteran of the trenches of WW1, Harry Patch, died in 2009. Even the children of veterans are passing away. As the Great War recedes into history, opportunities to uncover the combatants’ individual experience become fewer and fewer.

The Imperial War Museum launched Lives of the First World War in 2014, but now this extraordinarily ambitious project is drawing to an end. On 18 March 2019, the website will close to new contributions and the data collected will be used to create a permanent digital memorial.

That leaves a five-month window in which members of the public can take part. Many of us have information about WW1 combatants – stories, photographs and in some cases sign up papers, discharge papers, letters and medals.

Copies of these can all be uploaded to Lives of the First World War – something you’ll feel inspired to do if you watch They Shall Not Grow Old on 11 November, or catch it in a cinema before then.