Mothers on marriage certificates – a genealogist’s point of view 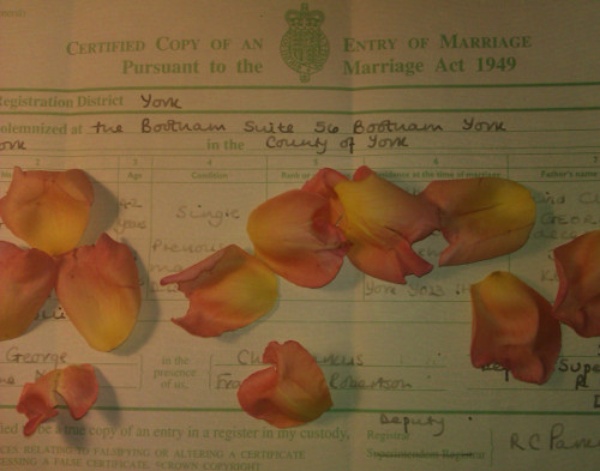 Today the Prime Minister announced that he has instructed the Home Office to allow mothers’ names to appear on English and Welsh marriage certificates. The issue of those missing mothers’ names has been a genealogist’s gripe for many years. In this interview, Peter Turvey explains why it matters for family history and particularly for probate research.

Launched by a petition on Change.org and an Early Days Motion in the House of Commons, the Mothers on Marriage Certificates campaign has been widely supported by genealogists.

“Genealogists and historians are getting behind the campaign,” The Telegraph announced, while the BBC reported that, “The calls have been echoed by clergy and genealogists.”

So it comes as no surprise that Anglia Research’s managing director, Peter Turvey, welcomes the Prime Minister’s decision.

“The situation we have at the moment is that fathers’ names and occupations are included on marriage certificates, but mothers are entirely absent,” he says. “Of course that’s wrong. It’s archaic and simply doesn’t reflect modern society.

“The issue at the heart of campaign has been equality,” he adds. “I certainly don’t want to undermine that. But I do want to address the issues for genealogy.”

With an eye for accuracy, he wants to set the record straight.

“As far as genealogy is concerned, I think things have been muddled. In a couple of newspapers, I’ve read that the absence of mothers from marriage certificates makes it much harder to research the female line, and that is simply not the case.

“If you have someone’s name and age, together with their father’s name, as you do for both parties on a marriage certificate, it is – all things being equal – just as easy or difficult to find their birth certificates, whether you’re looking at the bride or the groom.

“And a birth certificate will always give you their mother’s name.”

For Peter, the point is that the missing mothers’ names make genealogy harder. Full stop.

“I think Gerry Hughes, the chief superintendent registrar at Birmingham, made the point when he said, ‘If your father is John Smith you are going nowhere.’

“When you’re researching a family tree, and struggling with a common name, you need collaborating evidence. Two names are better than one. So while it’s not true that the omission of mothers’ details on marriage certificates makes the matrilineal line harder to investigate, it is true that missing mothers make tracing a family tree much harder as a whole.”

Genealogists of the future

Thinking about the genealogists of the future, Peter makes the point that we seem to be drowning in data, but we have no idea how ephemeral that data will be.

He’s confident that paper-based records – births, deaths and marriage certificates, written in special, heavily leaded ink to withstand the test of time – are something that genealogists are going to rely on for the foreseeable future.

“Overall, I think genealogists will have a much tougher job,” he says. “Nowadays a significant number of couples don’t marry at all, or marry after a child is born; they divorce, remarry, marry abroad. People move about like never before.

“The genealogists of the future need as much information as they can get. Quite apart from the issue of fairness, we will need that information about mothers.”