Search master to our roots 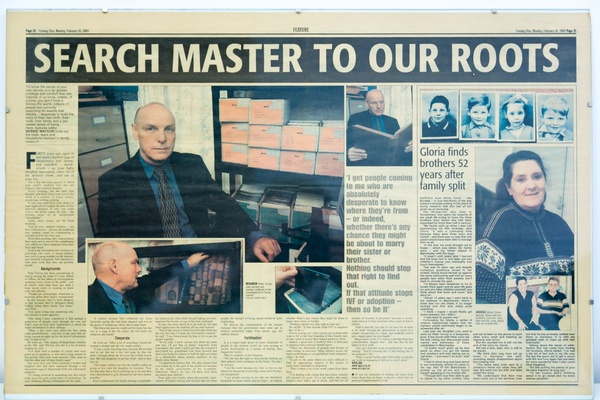 This interview with Peter Turvey, managing director of Anglia Research, originally appeared in the Ipswich Evening Star in 2004.

To have a sense of your own identity is a far greater privilege and comfort than the majority of us know. Across the world, millions of people are currently searching for exactly that identity, desperate to build the story of their own birth, their roots and their family.

Forty years ago, aged 16 and amid a hushed saga of illegitimacy and shame, you watched – dumbstruck – as your baby daughter was calmly taken out of the delivery room… and out of your life.

Not a day has since passed in which your child’s new-born face has not plagued your troubled memory.

Every evening, for the past four decades, you have closed your eyes to the world in a moment of lonely silence, wondering, wishing, praying.

If only you could have your chance to meet again and to explain the pain of that enforced adoption. If only you could convey the angst, the fear – the lifelong sense of an inexplicable detachment.

Sadly, such stories are far from fictitious.

Year on year, more adopted children – and their birth parents – all over the world are beginning a valuable search into their past. More than anything, they want to know their roots and unravel the complicated web which saw them separated from their flesh and blood.

Such is the fascination that websites on genealogy (the study of family history) now exist in great number on the internet, and research companies find themselves with more work than they can possibly handle.

Peter Turvey has specialised in tracing families for some 25 years [note: this article was written in 2004]. Based in Offton, he has taken on investigations from every corner of the globe – and he knows more than most just what a huge desire people have for a sense of identity.

“I’ve spent a long time pondering why this interest is more apparent. One thing I have considered is that perhaps a generation of people went through the war and didn’t want to relay their experiences or detail too much information to their children.

“Then a few years down the line, along come grandchildren – and they’re the ones that are being curious to make up for the lack of information they’ve had so far.”

He went on: “The stigma of illegitimate children in the 1940s and 50s has also led to a lot of stories coming my way.

“I’ve dealt with a number of clients who were given up for adoption, or who were young parents in this period. They now want answers. They want to find the other part of their family saga.”

One such story saw Peter reuniting a mother and daughter who had been separated through a not uncommon saga of illegitimate birth and subsequent adoption.

“Being involved in something like that gives me such a great sense of satisfaction,” he said, radiating obvious enthusiasm for his work.

“A retired woman had contacted me from Australia saying she had been adopted and was at the point of wondering where she’d come from.

“She knew her parents could well be dead, but she was at a stage in her life where she felt ready for whatever she found.”

He went on: “After a lot of searching I found the woman’s mother and the two made contact. It was a really touching story because the woman said to me that not a day had gone by that she hadn’t thought about the decision she’d been forced into. She was desperate to see her child – and so they met up.

“The happy ending was that the mother ended up going to live with her daughter in Australia. They felt that they had a lot of catching up to do and they were determined to give themselves the best chance possible.”

Peter’s enthusiasm for tracing families is insatiable. So much so that he often finds himself taking on investigations for friends on top of his own workload.

In part, this must surely be to do with the fact that Peter appreciates the benefits all too well himself.

“Part of the reason I found myself in this was the very fact that I’d done my own family research,” he said. “I was blown away by how it felt to put the jigsaw together.

“In my case, I knew various bits about my roots and how I’d got lots of family originally from Lancashire, but when I really got into the research I discovered my grandfather was from Ipswich and that I was living in a house in Suffolk right next door to a churchyard where several members of my family were buried.

“I could barely believe that. The only reason I had ever ended up in this part of the world was because of the family connections of my ex-partner.”

Peter talks very frankly about the possible implications of tracing families and accepts that for some people the thought of being traced would be quite frightening.

We discuss the consequences of the current rumours that the government may soon opt to remove anonymity rights from sperm, egg and embryo donors.

It is a major topic given so many thousands of people in the western world are now turning to in vitro fertilisation as a means of having their longed for family.

Peter is emphatic in his response. “No one has the right to stop anyone finding out their genetic roots sometime in the future,” he insisted.

“I do this work because my view is that no one should be denied the knowledge about their biological background.

“I get people coming to me who are absolutely desperate to know where they’re from – or indeed, whether there’s any chance they might be about to marry their sister or brother.

“Nothing should stop that right to find out.”

Family tracing isn’t only carried out by those who want to fill in the final branches of their family tree, or who want to locate their natural parent or child. Indeed, a great deal of Peter’s work is dedicated to helping track potential beneficiaries to unclaimed estates.

“There are dozens of cases sitting in solicitors’ filing cabinets across the region with money as yet unclaimed from someone’s estate,” he said.

“That’s where a lot of my work comes from these days. I’m dealing with claims that have been virtually left ignored for years. It’s a sad reality that many families lose touch and that, for all manner of reasons, it genuinely becomes a world-wide mission to trace someone who is next in line to inherit.

“Add to that the fact that it’s so easy for an error, such as a simple misspelling of a name, to be made through the generations, and suddenly you’ve got a major quest on your hands.”

Major quest or not, it’s clearly a job that Peter has coincidentally slipped into – but one that he has fallen in love with.

“You can’t beat the sense of satisfaction,” he said, smiling. “You’re crossing the t’s and dotting the i’s on someone’s life.

“That’s a great feeling and I feel really proud that my work is managing to deliver so much good.”