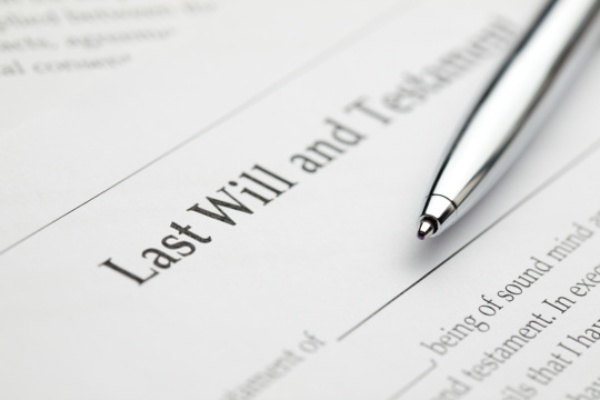 A blank last will and testament form with a pen laying over it.

Historically, people instructed their solicitor to draft their will. However, in recent years more and more of us are turning to DIY wills – including template packs that can be bought in high street stationery stores. In this article, our legal and compliance executive Rosie Kelly examines why some wills fail to comply with legal requirements and are ruled invalid.

One survey by the charity Will Aid found that in 2016 a staggering 38% of people chose to write their own will or use online or high street will writers rather than employ the services of a solicitor. Of these, 12% used a will writer, 9% made a homemade will, 6% purchased a DIY kit, 5% used a bank or high street service and 4% opted for a service that was offered on the internet. The remaining 2% used alternative methods.

The requirements for a valid will are set out in the Wills Act 1837. If the requirements are not met, a will can be declared invalid and the estate will be distributed according to the rules of intestacy. The Law Commission is currently undertaking a review of this area of law (see the article here) and will publish a report later this year. Law Commissioner Professor Nick Hopkins said:

“Making a will and passing on your possessions after you’ve died should be straight-forward. But the law is unclear, outdated and could even be putting people off altogether.… Even when it’s obvious what someone wanted, if they haven’t followed the strict rules, courts can’t act on it.”

As things stand, there are many reasons why the validity of a will might be contested.

The witnesses should be over 18 years old, so that they can give a credible account of what occurred if called upon to do so. If they are a beneficiary of the will, or married to a beneficiary, the will is still valid but any gift to them or their spouse would fail. Also if the witness stands to inherit under intestacy rules this could place them in a position of conflict.

While the rules around execution might seem complicated to the lay person, it’s worth noting that even professionals can make errors with this. Anglia Research once worked on a case in which an inexperienced solicitor wrote and co-witnessed the will with the beneficiary, rendering the gift to the beneficiary invalid and creating an intestacy.

A will can be declared invalid where there is found to have been ‘undue influence’ on the testator. To avoid any challenge along these lines, it is important that a will is made voluntarily and not under duress, and reflects the testator’s true wishes.

When a claim of undue influence is made, the burden of proof will be on the claimant. It was established in the historic case of Wingrove v Wingrove [1885] that “to be undue influence in the eye of the law there must be – to sum it up in one word – coercion”. This can be physical or emotional.

In the later case of Craig v Lamoureux [1920] it was held that “it must be shown in the particular case the power was exercised and that it was, by means of that power, that the will was obtained.”

There is no presumption in law that undue influence has taken place simply because a person in a position of power or trust is the beneficiary of assets and the case will be decided on the facts. The more recent case of Edwards v Edwards [2007] confirmed the principles set out above and summarised the additional criteria for assessing such claims. Broadly:

The rules of intestacy can also be triggered by a will being declared invalid on the basis of the testator’s ‘lack of capacity’, meaning that the testator did not have the requisite mental capacity and understanding to make the will.

The legal test for this was established in the historic case of Banks v Goodfellow [1870] which states that the testator must:

Our understanding of mental health issues and capacity has progressed since the Victorian era and the increasing prevalence of conditions like Alzheimer’s disease and dementia have further complicated matters.

The Mental Capacity Act 2005 sought to simplify assessments of capacity in a number of situations, but unfortunately was not drafted to include challenges to wills. The Law Commission’s review of the law around wills is likely to result in the test being brought into line with the Mental Capacity Act for consistency. For now however, the recent case of James v James [2018] confirms that Banks v Goodfellow remains the applicable legal test to be applied retrospectively in cases where testamentary capacity has been called into question.

A professional will writing service should include an assessment of mental capacity and this record would be the evidential basis for rebutting a claim of this kind against the validity of a will.

However, rebuttal may be more difficult with a DIY will and such claims can be common where the testator was particularly old or vulnerable at the time of the will being signed. One solution is to have the will witnessed by the testator’s usual GP, who is in a good position to judge whether they are of ‘sound mind’ and will have records and knowledge of their mental health status, medical history and any medicines that might affect their decision-making.

Where a person lacks mental capacity, leaving their will vulnerable to being challenged after their death, it is possible to have a statutory will made on their behalf. This is subject to a rigorous application process before being approved by the Court of Protection. See the government guidance here.

In order to begin the process of establishing whether there is a challenge to the validity of a will on the basis of fraud, lack of capacity or undue influence, disappointed beneficiaries will normally submit a request known as a ‘Larke v Nugus request’.

The case of Larke v Nugus (1979) 123 SJ 327 (judgment here) determined the principle that a request, usually formatted as a list of questions, can be made to the solicitor that drafted the will to provide a statement of the key facts and information surrounding the making and execution of the will.

Although there is no legal obligation for the solicitor to respond, failing to do so may result in being ordered to attend court and pay the other party’s court costs should the matter proceed to court. If the will is declared invalid, the estate will be distributed according to the rules of intestacy or the wishes set out in an earlier valid will.

Once executed, a will should be reviewed and updated periodically to reflect changed intentions or circumstances, such as divorce or new additions to the family. More substantial or numerous changes will necessitate a new will, but minor alterations – for example a simple addition, substitution or address change – can often be dealt with by way of a codicil. This is a legal document that amends the will and is formally executed in the same way as a will.

Problems commonly arise when the testator makes subsequent changes to their will by hand and does not have these properly witnessed.

It is important to remember that marriage revokes previous wills (unless the will states that it is being made in contemplation of the marriage). For example, if someone makes a will leaving money to children from their first marriage, but later they remarry and fail to make a new will before they die, their estate will be distributed according to the rules of intestacy. Given that many people fall foul of this rule because they are not aware of it, it seems likely that the forthcoming Law Commission report on reforming the law of wills will recommend changes in this area.

Another problem that can arise is when a couple make mirror wills – a type of will structure where both partners leave their assets to each other. To avoid an intestacy, it is essential that these wills include a provision for how the assets should be distributed on the death of the second spouse.

Anglia Research have encountered intestacies which have resulted from mirror wills upon the second death. If the remaining person has failed to make a new will following the death of their spouse, and their will leaves everything to the deceased, the beneficiaries of the estate will be determined by the rules of intestacy.

When the original will has been lost or destroyed in a fire, it will normally be presumed revoked and result in an intestacy. However, it may be possible to obtain a grant of probate with a photocopy of the will, but it will need to be proved that the document is an authentic copy will.

This is an arduous process and the application would need to be supported by an affidavit – a sworn written statement which can be used as evidence in court – explaining the circumstances by which the original was lost and giving facts and statements which rebut the presumption that the missing will has been revoked.

When a will is not drafted and executed in the proper manner, not only is there a risk it can create an intestacy in which assets do not pass according to the wishes of the deceased, it can also result in family rifts and litigation. Along with land boundary disputes, contentious probate is known to spur some of the most vicious and long-running legal battles. The simple solution is to ensure you make a watertight will.