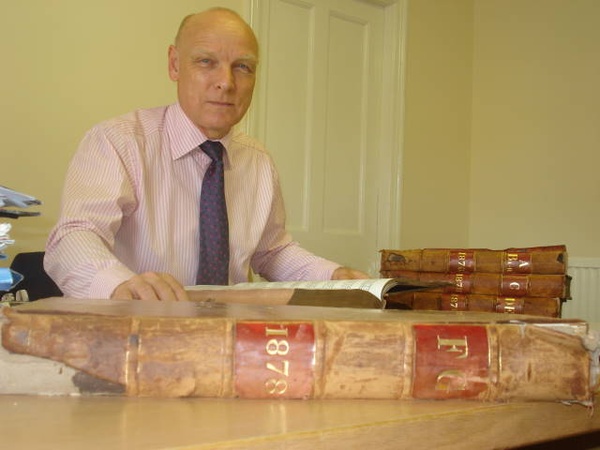 Peter Turvey describes how he came to set up Anglia Research (this article first appeared in issue 7 of The Expert, the newsletter of the Association of Genealogists and Researchers in Archives).

I am, or was, a native of Lancashire, and I assumed that my forebears stretched back in that county for generations. After an interesting and adventurous young life, I settled down, for business reasons, near Ipswich in Suffolk. Imagine my surprise when in the 1970s I took up the hobby of family history and quickly discovered that my maternal grandfather had been born in Ipswich. Not only that, a long line of his direct ancestors could be traced back in the next village to where I had settled. Talk about getting hooked!

I went on to research my family in depth, and I also employed professionals from time to time in areas or subjects which were difficult for me.

Here I was frequently disappointed with what they produced. As a businessman, I often felt there was a lack of professionalism or competence in their service. Thus, a little while later, and after a series of courses in Latin and palaeography (not to mention devouring every book available on the subject) Anglia Research was born.

I focused on East Anglia first, and then, as my knowledge grew, I developed a country-wide service. Nowadays that isn’t a difficult step, but back then it meant having some knowledge and experience of virtually every repository in the country, or at least having reliable and competent colleagues in the relevant areas. Well do I remember my regular weekly ‘London day’ – always a Wednesday, in order to take advantage of the Society of Genealogists on its late night – when it wasn’t unusual to visit seven or eight repositories in the course of the day. I think my all-time record was twelve, taxiing between Lambeth Palace and Dr Williams Library and the Society of Friends, to name but a few. It was always interesting, but not always enjoyable. I still shudder at the memory of the Soviet-style process for accessing census records at Portugal Street!

I offered many ancillary services, all connected with research and archives. Best of all was being the agent for two charities that specialised in reuniting families and locating natural parents. After several years I joined the Association of Genealogists and Researchers in Archives (AGRA), and I soon had a short spell on council. Ill-health interfered for a while, and when I became full-time again in the mid-1990s, I began to focus on probate genealogy. This became the mainstay of Anglia Research, and with the help of two of my sons the company has grown and flourished. Although I have consistently declined to take part in the Heir Hunters programme (I just don’t like it), we do undertake research for a number of media organisations, including assisting with several episodes of Who Do You Think You Are? for the BBC.

Standards and professionalism have always been important to me. I rejoined the AGRA council a few years ago and after a while I took a place on the board of assessors, becoming its chair the following year. Just like the government is always saying (but in my case I mean it!) my interest is in seeing that the consumer gets value for money and enough information to be able to make an informed choice.